Can A Refrigerator Have A Freon Leak?

The History of Freon

Freon is a registered trademark used for a number of halocarbon products. They are stable and low toxicity, generally used as refrigerants. In the late 1920’s a research team found this to be a suitable replacement for dangerous refrigerants then in use, and in 1930 General Motors and DuPont began to produce Freon.

Freon is kept in your fridge in a contained and pressurised container – and should never need to be topped up. Can a refrigerator have a freon leak? This question can be answered simply with a yes. It probably won’t be dangerous – there aren’t enough refrigerants in most systems to pose a threat – unless you have an allergic reaction, or the fridge is in a really confined space. Freon is, however, damaging to the environment. The usual cause is a puncture due to attempted repairs or by ice being scraped away during defrosting. 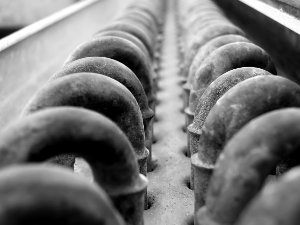 Fridge gas leak symptoms include the smell of chemicals, oil on the floor, or a continuously running motor.

Is your refrigerator leaking Freon?

An initial clue to a gas leak in your fridge freezer is that the temperature doesn’t seem to be as cold as it should be. This could indicate a fridge freezer gas leak. Freon becomes a gas at room temperature, and a liquid when cooled or compressed. A constantly running motor attempts to bring the temperature back to the desired level to compensate for the wrong amount of refrigerant in the unit.

When your refrigerator develops a Freon leak it won’t be able to run properly, resulting in produce not being kept as cold and fresh as normal. Other indicators are higher energy bills as a Freon leak causes the motor to run for longer, using greater amounts of electricity. Unseasonal high bills are a cause for concern as spikes in usage can point to a gas leak.

If Freon leaks into an open flame such as a gas water heater, it can create a deadly chemical. Mix washing up liquid with a little water and pour into a spray bottle and spray all of the piping. Freon leaks will create small bubbles which you can’t see unless the surface is appropriately prepared.

Sealed system problems can be identified by unplugging the refrigerator and taking apart the freezer compartment. This exposes the evaporator coil that should be very cold. Plugging the refrigerator back in to determine that the evaporator coil is lightly frosted on about two thirds of the coil. If the coil is wet and clammy or just frosted in one small section this indicates a sealed system problem.

Although Freon is basically odourless if you experience an unusual musty smell coming from your refrigerator and you can’t trace it, it may be related to a Freon leak.

Any refrigerator gas leak repair can be carried out by trusted appliance repair specialist who has the experience and the expertise to swiftly diagnose and fix the issue. If the problem is found to be a Freon leak the unit will need to be replaced instead of being repaired, unless your appliance is fairly new.

You can buy a leak detection kit if you want to be sure – there are many other electrical or mechanical problems that could be causing these things. Leak detector toolkits are small electronic devices that sense halogens – the group of gases that includes Freon.

Freon is mostly odourless but when leaking can emit a chemical smell. It’s also colourless so it won’t be noticeable.

Why is my fridge leaking ?

This could be a by-product of a Freon leak and can be a distance from the leak itself, so you need to clean the bottom of the fridge and look for tell-tale residue. Then use a spray bottle and a soapy solution to spray the piping – Freon leaks will create small bubbles revealing tiny issues.

If your refrigerator is leaking Freon the motor will run consistently – a motor that stops and starts or stops altogether is indicative of an electrician fault. You should never attempt repairs that may open, puncture, or cut into your fridge pipes as this can break the seals and cause the Freon to leak. 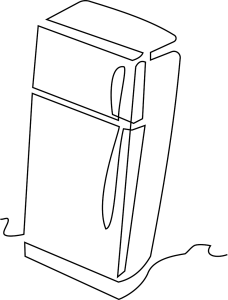 It’s worth bearing in mind that very old fridges and absorption type models – used in campers and where electricity is unreliable – use ammonia as a refrigerant, and this can be toxic and dangerous. Although this isn’t strictly Freon it’s often referred to as such. Absorption type fridges often use other gases as a power source and can be hazardous if leaked.

When some refrigerants come into contact with open flames – this can cause a reaction that forms poisonous gases. If you use gas hobs in your kitchen you should keep them turned off if you believe you have a Freon leak.

Disposal of Freon from your refrigerator should be handled by a certified professional. The freon gas is contained in a sealed system that will last if not compromised, so if you have any concerns about a fridge gas leak repair simply call in the experts.

Modern refrigerators use various forms of tetrafluoroethene as a refrigerant. As of January 2020, appliances using Freon are no longer being manufactured, with ozone-friendly replacement refrigerants being offered.

The Clean Air Act doesn’t allow any refrigerant to be vented into the atmosphere during installation, service, or retirement of equipment meaning that existing units can continue to be repaired and serviced without a need for replacement, but new appliances will be manufactured using non-ozone depleting alternatives.

New sealed systems will incorporate compressors and other components specifically designed for use with replacement refrigerants. Homeowners with older appliances should consider buying energy-efficient fridge freezers that use much less energy to produce the same amount of cooling.

Freon will have an effect on your health over time – but is only dangerous in extremely high concentrations. It can make you dizzy, cause breathing problems, and has greater effects on those with heart conditions. As the leaking gas will stay in higher concentrations close to the ground this may also affect children and pets exposed in the area.

Is a refrigerator Freon leak harmful?

Refrigerant poisoning can happen if you inhale any chemicals from the Freon leak in your fridge. These fluorinated hydrocarbons are odourless and tasteless, and can cut off the oxygen supply – breathing in high concentrations can be potentially fatal.

Mild exposure to Freon in an area that’s well-ventilated isn’t normally serious, and accidental poisoning is extremely rare. If you notice any of the following symptoms from mild to moderate refrigerant poisoning you should get in touch with your doctor:

Freon is dangerous if too much is inhaled at once and this odourless and tasteless gas cam lead to death if taken in excessive amounts. Bear in mind that severe refrigerant posing can cause additional symptoms such as:

What is the treatment for refrigerant poisoning?

If you’re showing signs of refrigerant poisoning from a refrigerator gas leak you should get in touch with your emergency services. You’ll be taken to hospital where your heart rate, breathing, and blood pressure will be monitored. Direct treatments may include:

The Environment and Freon

Freon has been defined as one of the most significant environmental pollutants as it contributes to both ozone layer depletion and global warming. Greenhouse gases such as carbon dioxide, and emissions from Freon absorb infrared radiation and hold it in the atmosphere.

Refrigerants that leak into the atmosphere from faulty or poorly maintained equipment can have the same impact as running a car for six months, as one kilogram has the similar effect of two tons of carbon dioxide.

Freon is very bad for the environment as it’s one of the most potent pollutants. When it gets into the atmosphere it damages the ozone layer that protects the earth from the sun’s radiation. The US Environment Protection Agency now regulates how much Freon can be brought into the country in any given year and is gradually phasing out the refrigerant.

Most use of Freon is now banned or severely restricted for the reasons stated above. Brands of Freon containing hydrofluorocarbons instead have replaced many, but they are also strict control as they are deemed to be super greenhouse effect gases.

With over 10 years experience in the appliance repair industry Mix Repairs, have a reputation for providing the highest level of customer care from skilled and professionally trained technicians. Fridge repairs will come without any hidden charges and with a six months guarantee.
If you suspect a leaking fridge and the culprit is Freon the safest thing you can do is contact the specialists – a qualified expert will quickly determine if there’s a leak and do all the necessary repairs.

Can A Refrigerator Have A Freon Leak? was last modified: June 23rd, 2020 by Mix Repairs
28th August 2018 Mix Repairs Categories: