Signs that Your Dishwasher Needs Replacing

One approach to replacing your dishwasher is to wait until it breaks down and your repairman advises you that fixing it is going to be so expensive that it’s not cost effective. The trouble with this method is that it’s pretty much certain that the appliance will fail just when you need it most. Worse yet, you’ll end up making your new purchase in a rush. All of this much adds up to the worst possible way of deciding when to get a new dishwasher.

A much better option is to be aware of the signs a dishwasher needs replacing or repairing. This way you can plan your budget in advance, do your research ahead of time and choose a new unit that’s ideally suited to your needs.

Signs That Your Dishwasher Needs Attention

Any of the following signs indicate that you need to fix or replace your dishwasher. As to which, sometime the fault itself is a fair indication, other times you’ll need a technician to advise you. 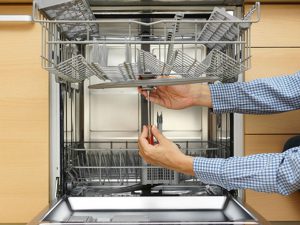 Rust on the inside of the unit could just be because a metal cooking dish was touching the inside of the appliance during a wash cycle. In this case, an empty cycle, run with the addition of citric acid will generally fix the problem. If the plastic coating on the racks has come away and the rack is corroding, it will need replacing if a spare is obtainable.
Flakes of rust or corrosion around the door is a bigger problem. This, or rusty water underneath the machine is generally a sign that the unit is coming to the end of it’s useful lifespan.

The water isn’t getting hot enough

Hot enough for a dishwasher means at least 77 degrees Celsius. At lower temperature, your dishes might look clean but there’s no certainty that they’re sterilised. You’ll notice the problem when you empty the unit promptly at the end of the cycle and the dishes aren’t hot. If the heating coil is broken and the machine is past its guarantee period, replacement is likely to be more expensive than it’s worth.

Before assuming that the unit needs replacing you should check filters to make sure they’re not blocked with food debris. If there’s no sign of blockage, it’s time to call a technician to assess the appliance.

A once-only rattle most likely means you didn’t load as carefully as you usually do, and one of your dishes was moving around. Persistent strange noises could indicate that either the pump or the motor are nearing the end of their lifespan. Both of these parts tend to be expensive to replace.

Water leaking onto the floor

The dishwasher is more than eight years old

Strictly speaking dishwasher life expectancy is more accurately measured by the number of cycles it’s been used for, rather than its calendar age. However, energy efficiency has improved over recent years and if an older machine needs even relatively inexpensive repairs, by the time you factor in this cost and the lower running costs of a new machine the sums may come out in favour of replacement.

Sometimes this just means the latch needs replacement, but it could also signal that chronic leakage has caused the machine to warp. This is definitely not fixable so it’s time to buy a new dishwasher.

Any cookies that may not be particularly necessary for the website to function and is used specifically to collect user personal data via analytics, ads, other embedded contents are termed as non-necessary cookies. It is mandatory to procure user consent prior to running these cookies on your website.