Who Invented The Washing Machine? The History behind Our Laundry

A washing machine is defined as a machine using water and detergents to clean laundry such as clothing and bedding. Before indoor plumbing housewives had to carry all the water needed for boiling, washing, and rinsing every day from the pump, well, or spring! Clothes washer technology developed as a way to reduce this labour, and the earliest machines were hand operated and made from wood. Want to know more? Read on to discover our washing machines history…

The invention of the washing machine has been attributed to Nathaniel Briggs of New Hampshire in 1797, and Amos Larcom of Water Vliet, New York in 1829. Washing machine and wringer mechanisms appeared in 1843, followed by the invention of the Triumph Rotary washer by Margaret Colvin in 1876 in Philadelphia. Electric washing machines were advertised in 1904 and the most basic types of washing machines introduced in the 1900’s were powered by electricity to rotate the tub. Short circuits and electric shocks were commonplace as the motor beneath the machine wasn’t protected from the water!

Ten years later saw the domestic washing machine evolve with mechanisms and motors enclosed in a protective housing, fitted with fans to prevent overheating. Early automatic varieties were normally connected to a water supply with temporary slip-on connectors to sink taps, and many had coin slot facilities and were installed in the basement laundry rooms.

In the late 1940’s and early 1950’s improved front loading automatic models were introduced, alongside a first top loading machine. All of these required electromechanical timers to sequence the washing and extraction processes. By the 1950’s demand for greater flexibility in the wash cycle led to the introduction of more sophisticated timers, but fully electronic timers were years away.

During the 1960’s twin tub machines became very popular, and in the 1970’s the electronic control of motor speed became a common feature on more expensive models. In the early 1990’s upmarket machines had microcontrollers for the timing process, and in 1994 the System 2000 washing machine was released – the only top loading, horizontal axis washer to be manufactured in the United States. 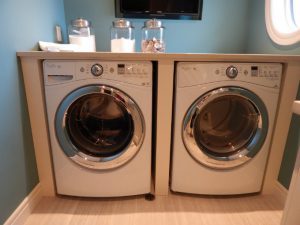 Computer controlled systems were presented in 1998 which were able to determine factors such as load sizes and wash cycles, and in 2000 a washing machine with two cylinders rotating in opposite directions claimed wash times were decreased and cleaner washing was produced! Models were upgraded with air wash functions, delayed execution timers, predefined programs, and variable temperatures throughout the decade.

Modern machines basically come in two types – the top or front loader. Front loaders provide a more thorough and vigorous wash, use less energy and water, and are gentler to garments. To ensure your machine stays in great working order you should care for it ongoing by using these washing machine maintenance tips:

First class washing machine repairs in East London can be easily sourced online. Choose a company that specialises in domestic appliance repairs, and can ensure a full and comprehensive service. Make sure staff are well trained in the repair of all new appliances, and are authorised technicians.

Who Invented The Washing Machine? The History behind Our Laundry was last modified: May 22nd, 2018 by Mix Repairs
10th May 2017 Mix Repairs Categories: